The best of both worlds? 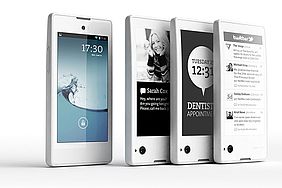 At MWC in Barcelona many new cell phones were presented. Among these one from Yotaphone, a Russian company that is proposing a dual screen phone, one screen with high resolution color, the other using eInk technology. The former is nice to see, the latter does not drain your battery.

As you can see in the photo, the cell phone is completely covered by the two screens, one on the front and one on the back.

The idea is that the black and white eInk screen is always on. The power needed is so low that it really does not make any difference. On that screen you can see that an email has arrived, and you can swipe with your finger to read it. You can see your calendar displayed and so on.
The color screen is to be used for fancier visualisation.

The battery remains the Achille's heel in cell phone. No matter how much electronics (and software) are getting better in using less and less power, the increased performances of cell phones keeps draining the battery more and more. For engineers it is a feat just to keep the battery life constant, as performances increase.

Batteries have improved but not any faster than the need for power by more and more performant electronics. There are also a few constraints that will not go away: the density of energy storage, which is what you need to increase unless you are prepared to use bigger and bigger (in size) batteries, brings along the danger of having so much energy packed in a small space, a tiny bomb, as a matter of fact. We have seen, in very few cases!, cell phones "exploding" because of a faulty battery. Just imagine if that battery was packing more energy!

A different approach is to use a system that makes energy available through transformation of one energy source into another, with the former being more stable, and hence safer to carry around. An example is the use of fuel cell where you have a high density energy store in terms of hydrogen, or other gas, that gets transformed into electricity on demand. Some examples have been made available, mostly targeting laptop, but they never got approved by the FAA to be carried on planes and that was a show stopper.

Another approach would be to have faster recharge, or a continuous recharge through evanescent waves (energy scavenging from the ambient). This is also addressed in a number of researches but so far we only have seen prototypes and no commercially viable product.