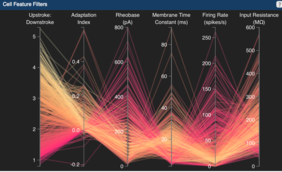 I already mentioned the Allen Brain Atlas in a previous post, about a year ago.

Atlases are very common and they have been able to provide all of us with a visual understanding of the Earth geography. Then they have expanded to cover minerals, religions... including the human body.

However, creating an atlas of our brain has been so far an impossible feat (there are plenty of atlases of the human brain but they are not anywhere near the level of detail provided by a geographical atlas).  This is where the Allen Brain Atlas comes in.

By using ever more advanced technologies it aims at depicting single neurone detail, to show the connections among neurones and the circuits that are being formed.

In June the Allen Institute has launched the Allen Brain Observatory, a tool open to researchers to visualise and study the growing mass of data that are becoming available on the brain. The first release opens the view on the visual brain circuitry of a mouse brain.

It is amazing to see the level of details that is now becoming possible, to the point of seeing single neurones and single synapses firing.

Actually, the data set is so huge that the problem now is to be able to make sense out of them.

Just seeing the visualisation of the inner working is amazing. Even if I do not understand the meaning of those neurones firing (what is going on, why they are firing and most important what that firing "means" to the mouse) I am fascinated by the capability of observation that technology is making possible.