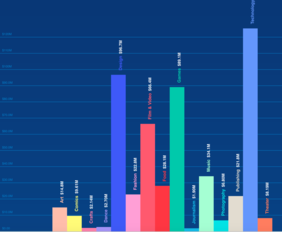 Many innovations across a broad spectrum. Technology related innovations were the ones that received most funding, 125M$. Credit: Kickstarter

Kickstarter is magic, at least that is my feeling. They have been able to fund 22,252 projects (many more were submitted) harvesting 529 Million $ through crowdsourcing (that is over 1,000$ per minute!). You should take a look at the numbers published by Kickstarter as a summary for 2014.

In looking at those numbers I was impressed by the variety of innovations, spanning from comics to theatre, from music to fashion, from photography to journalisms and of course to technology.

Technology projects represented less than 5% of the whole, significantly less than other areas (music topped the list with 4,009 projects vs 1,124 technology projects) but where the ones that harvested most funding (125 M$, more than what we have been investing as EIT ICT Labs funding in technology innovation).

What also amazes me is the participation of the whole world, with people pledging from almost any Countries, including Afghanistan, Mongolia and Uganda (just to name a few Countries that I would not have expected for their limited internet connectivity). "Our" 9 EIT ICT Labs Countries pledged over 75M$!

Another thing that amazes me, and that has me spending every day a little time on the Kickstarter website, is the way projects are presented, usually in a very crisp and convincing manner, and the fact that they always plan to deliver within a few months and embark the pledgers among their first clients.

This is what innovation should really be about: talking to prospective clients and be so convincing that they are moved to sustain your work by pledging part of the funding needed to make it happen!