That rumble? It's a motor in my stomach! 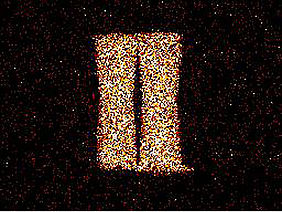 You surely have been embarrassed, once in a while, by your stomach rumble, at least I had. But you might have a tech excuse at hand in the near future.

At the university of San Diego researchers have made the first successful experimentation of a motor that can be placed in your stomach to deliver drugs. The experiment has been carried out in a mouse stomach, and you may wish to volunteer to be next in line!

The motors are made by micro tube of zinc that use hydrogen bubbles created by the interaction of zinc with the chlorine of your stomach juices as propulsion.

They are really tiny, each one being about one fifth the size of a human hair with a cone shaped head that can stick inside the stomach linen. Each can be loaded by drugs that can then be carried and released on the stomach wall. The experiment has shown that the motors can deliver 168ng of drug per each gram of stomach epithelium, that is 3 times as much than what can be delivered by drug contained in a pill you swallow. This higher efficiency is achieved through the fact that the micro-motors act like small rockets that hit the epithelium and then release the drug under it rather than requiring the epithelium to absorb it as it happens in drugs released by a pill.

The experiment involved the sub ministration of drops of liquid to the mice, each drop containing hundreds of "motors". As soon as the hit the stomach juices they started to move around at a speed of 60 µm per second and have shown that they can function for as long as 10 minutes (that means they can cover a distance of over 3cm, which is statistically enough to hit the stomach linen).

It is not the first time that researchers are trying to use some sort of motors to deliver drugs in the stomach linen (that remember has been engineered by Nature to be pretty impermeable to liquids of any sort, which makes good sense considering you don't want the chlorine of the stomach juices to find a way to spill off the stomach). Motors made of platinum have been tested but they have not shown the same effectiveness as these (they roughly compared with a drug delivered by a pill).

The next step will be to get approval for application in your, and my stomach. Researchers are already working to see how to provide some sort of navigation capability, which can be very important to deliver drugs to specific areas, like the site of a stomach cancer.

And, coming back to this post header ... these motors won't really rumble at all, but you can still claim they do... no-one will know it is not true!