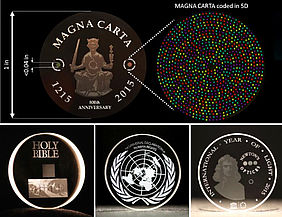 You may remember Superman retrieving the knowledge from his planet, Krypton. That knowledge was stored by his parents into crystals, so powerful to store an amazing amount of information and so resilient to survive the explosion of the planet and travel through the space.

It was a nice idea, pure science fiction. Although the movie appeared in 1978 the idea goes back to 1939. The idea of storing information in a crystal had no scientific base, although it was nice.

Today we are storing information with light, think about CDs and DVDs. Holographic memories have become a reality with inPhase in 2005 demonstrating them but in spite of several attempts to create a product they didn't win the market. The low speed in reading/writing killed them.

Now scientists at the University of Southampton have developed a data storage method that is strikingly similar to the one "invented" for Superman.

They called it 5D data storage, since the information is stored along the three axis (in space), as well as size and orientation. Like Superman they use quartz crystals and the information are written using pulses of laser light to change the optical characteristics of nano-spots in the crystal. A laser beam can then "read" the crystal, its light altered by the optical state of the nano spots.

Like the Superman crystals these are extremely resilient: scientists have calculated that information written in them will last for over ten billion years. An ideal storage if one wants to preserve humankind knowledge till the end of time.

This storage support is not going to replace current storage for our everyday use, it is way slower than what we have got used to, but for storing information we want to preserve for generations this is unbeatable.