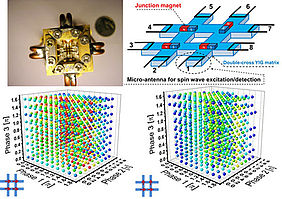 Magnetism is the result of electron spin. Once you have a significant number (billion of billions) of electrons showing the same spin orientation in a material (and a negligible number of electrons with different spin orientation the net sum clearly points in one direction: we have a magnet, like the needle of a compass. And we can detect this direction.

Actually, every material, at the atomic level, shows magnetic properties, it is just they when we have non uniform direction in atoms spin we simply don't detect any. OK, so far so good, I hope.

Our technology has progressed significantly and we can now detect very very low magnetic fields, fields generated by a small preponderance of atomic spin in a material in a specific direction. This progress has led to the discovery of changing magnetic fields over time, oscillations that can be detected. These oscillations, of course, are magnetic waves, and as any waves when we look at them we can detect interference: two (or more) waves overlap and reinforce or decrease the detection (beware, waves do not interfere, interference is a phenomena of our measurement of fields: if two waves are "adding up" we will measure a bigger field, if they are subtracting from one another we will measure a lower field).

Welcome to magnonic, the study of spin waves!

Researchers at the University of California, Riverside, have been able to demonstrate a magnonic holographic memory that can both store and recognise patterns. It is called "magnonic" because it is based on electron spin magnetic fields and holographic because it works on the interference of several spin waves. This latter, in a way, makes it similar in behaviour to a quantum devices, although at what I may call a "macro level" (since it deals with magnetic fields generated by many electrons and not the quantum waves of a single electron). As a quantum device it can process many information at the same time (waves interference) and this makes it particularly interesting for image and sound/speech recognition.

The detection of the interference pattern takes place in 100ns and might change the way we will eventually interact with the world around us, having a computer that can recognise it, and its components, as we do.