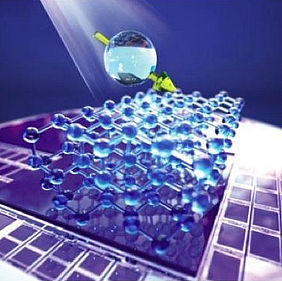 Light polarizes silicon nuclear spins within a silicon carbide chip. This image portrays the nuclear spin of one of the atoms shown in the full crystal lattice below. Credit: Chicago University, rendering by Peter Allen

I wrote about the use of spin as a potential leap in the next decade electronics. An electron can be seen as a beads that "spins" on its axes. Never mind that an electron is not a bead, and that it does not rotate. It is a useful image to descrive a phenomena.

As result of the spin a magnetic field is generated, and it can be measured. This is what makes magnetic resonance possible. The problem is that, with the exception of magnetic material (like magnetised iron), the spins of atoms in an object is random so that the effects are cancelled and no magnetisation is detected.

Under certain condition it is possible to kick an electron to assume a given spin and to do that for the majority of electrons in an object. At that point the object looks and behaves like a magnet.

Having the possibility of directing the spin of the electrons makes it possible to use it as a storage of information as well as a processing unit, a logic gate. This has been done in labs and I have reported on the progress.

The crucial issue is how this spin can be forced. So far it has required the cooling of the material to near absolute zero, and the reason is that the magnetic field resulting from the electron spin is some 1000 times weaker than the electric field of the electrons. This means that a infinitesimal perturbation is sufficient to alter the spin, hence the reason why scientists are cooling the atoms to avoid thermal kicks on the electrons.

Now researchers at the University of Chicago have found a way to polarise (set) the spin of electrons in a silicon carbide chip using infrared light to align the electron spins. Normally a beam of light does not interact with electrons and nuclei but the researchers discovered that the layering of silicon carbide atoms in a specific way created points that interact with infrared light and forces the spin of electrons in a certain direction generating a fall out mechanism aligning the spins of the surrounding electrons (as if the infrared light has the power to cool down electrons).

This is quite interesting since it provides an affordable way to manipulate spin and hence to use it for a variety of application, from magnetic resonance imaging to new dense storage memories and faster processing chips using lower power.

We are still not there in terms of commercial spintronics but we have got one step nearer.