Solid State Electrolyte may be a game changer in batteries 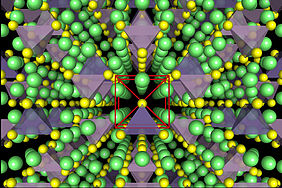 Rendering of the crystal structure of a superionic conductor. The backbone of the material is a cubic-like arrangement of sulphur anions (yellow). Lithium atoms are depicted in green, PS4 tetrahedra in violet, and GeS4 tetrahedra in blue. Credit: Yan Wang

An interesting news comes from MIT where a team of researchers in cooperation with others at Samsung, UCSD and University of Maryland have created a solid state electrolyte that can replace the usual liquid electrolyte in batteries.

Liquid electrolyte is not ideal however, since it can become instabile (if heated or if the battery case is punctured) and because it degrades after several charge-recharge cycles.

In the news, researchers report the discovery of a solid state electrolyte (SSE) that shows transport characteristics similar to the liquid electrolyte used in lithium batteries. Additionally, the SSE demonstrates an unlimited number of charge-recharge cycles capability and the materials it is composed of does not present risk of overheating and explosion.

The researchers claim that the SSE created is good per se but the study is also paving the way to the creation of other kind of SSE materials with even better performances.

Let's see how long it will take to have SSE in our cell phones batteries.