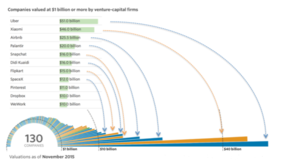 The top ten "start up" companies based on November 2015 valuation. Source: WSJ

Only 2 years ago focus was on start up that reached 1B$ valuation (the Unicorns). Then so many started to reach the thresholds that focus moved up one notch to 5B$ and now, according to WSJ the threshold has been moved up once more to the 10B$. In two years it is quite a change!

As of November 2015 there are 11 companies that have reached the 10B$ thresholds with a hundred+ are at or over 1B$.

Uber tops the list at 51B$ (august 2015) followed by Xiaomi with 46B$, an equivalent of Apple in China, manufacturing smart phones that are a hit with a growing number of fans (in China only, but let's not forget that the market is 1.7B people!).

Airbnb comes third and Palantir fourth. This latter is less known to the general public: they are selling software able to analyse tons of data and discover relationships. It is used by investigation agencies with (apparently) good success.

At the fifth place we find Snapchat and on the sixth Didi Kuaidi, a Chinese equivalent of Uber. Seventh is Flipkart, the equivalent of Amazon in India, and eight is Elon Musk's SpaceX, the space company that has been able to enter into the space biz in the last few years with a payload cost that is half of that charged by Boeing/Lockheed.

So, of the first 10, 1 is from India, 2 are from China and the other seven from the US.  None from Europe. To find a company from Europe we need to reach the fourteenth place where we hit on Spotify with a valuation of 8.6B$.

Clearly innovation comes more difficult to Europe, China and India can both leverage on a market place that is way bigger than the US and European ones and that give them an edge. But the European market is not that different, in size, from the American one hence we should be able to compete with them.

If you look at the companies on the top ten you see that they benefit from a regulatory environment that is more open to innovation than the one in Europe. Uber is fighting in Europe against the willingness to maintain the status quo. The story in the US is different, which does not mean that there are no resistance or frictions from the existing business. But in general the approach in the US is first you do and then see how to manage adverse reactions. In Europe, on the contrary, the approach is: first you ask for permission and once you get it then you can act.

In a world where Countries boundaries are fading out (in the cyberspace) this asymmetry is a heavy burden on European innovation.