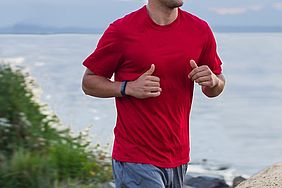 Pivotal living band. It sells for just 12$ an it works.... Credit: Pivotal Living

2015 has seen the sale of smartwatches, from Apple to Samsung, packed with features including those to monitor our fitness activity. The general consensus seems that having a constant reminder of how active you have been is actually pushing us to be more active and more conscious of the need to do some exercise.

However these smart watches, although sold in millions (Apple watch is estimated to have sold some 7 million pieces till September 2015, although no official number has been released by Apple and analysts estimates vary), are just the tip of the iceberg.

Much lower cost wearable fitness devices, mostly wrist bands, have created a 1B$ market in 2014 that has now increased significantly with an expected number of devices sold reaching 76 million in 2015 (IDC estimate) a 160+% growth over 2014, and it is expected to grow to 14.9 B$ in 2021 according to Radiant Insight.

There are now on the market fitness bracelet selling for as low as 12$ (Pivotal Living). Don't be misled by the price. Even a 12$ fitness bracelet comes packed with information. Sensors pricing is spiralling down and the raw data they provide are processed in your phone by an app sold along with the bracelet. So the actual cost (BOM) is very low.

I expect these various form of continuous monitoring to become a normal apparel in our everyday life. By the next decade it would be unconceivable not to have a monitoring device (possibly integrated in the smart phone or in our dresses, but also in the bathroom mirror, in the car, in the office terminal and desk).

This is bound to trigger a different attitude in our idea of health care, shifting the attention to proactive measures. And it will go well beyond the monitoring of our bodies to include monitoring the context we live in, including the food we eat and the air we breath. Along with that, plenty of opportunities for innovation in particular by small companies and start up. My take, at least!