Smart patches are getting smarter 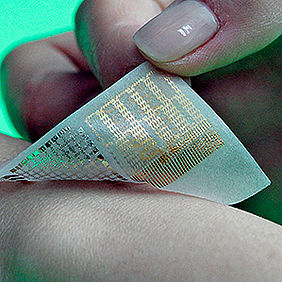 In the last two years I have posted a few news on smart patches, bandages with embedded electronics that can sense the presence of bacteria infecting a skin lesion, like the ones left by surgery.

Now these patches have evolved further, can sense a wider range of conditions and can release drugs to cope with them.

This is the result of work carried out at the Seoul National University, in cooperation with MC10 -a start up in Cambridge, Boston, seeded by medical companies- leading to the development of a Band-Aid type of patch that can detect tremors and release drugs, published in a paper on Nature Nanotechnology.

They have created patches that can be worn as a second skin by monolithic integration of nano membranes containing nano particles on a tissue like polymer substrate that can contain stretchable electronics.

The membranes are produced in a top down fashion (conventional production methods) whilst the nano particles containing drugs molecules to be released on command are manufactured in a bottom up way (nanotechnology).

The patch can sense tremors and process them deciding the release of drugs.

Movement sensing is done through silicon nano membrane sensors arranged in serpentine patterns each curve a few hundreds micrometers apart. The movements produces a stretching in the serpentine that in turns changes the resistance. This change is stored into a memory that is just 30 µm thick. Additionally, the membranes include heating spots that once activated result in the release of drugs on the skin from the nano particles embedding them.

So far no communication has been embedded in the patch but researchers consider natural to add it in form of an RFID that can be read by a smartphone.

The first application is to counteract movement disorders although it will take a few more years to pass the required clinical trials.