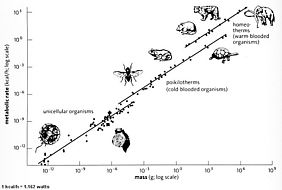 The ratio of metabolic rate versus the mass of an organisms is amazingly constant in all organisms. Depending on the "structure" of the organisms it can be more or less efficient. This observation was made by Kleiber in the last century and explained in terms of fractals at the end of the last century. Credit: Universe-review.ca

Life on Earth has been possible through an organisation that defied the second law of thermodynamics, making order, and keeping order out of (random) chaos. This can be a physicist statement. You can of course have other points of view but at the very basic level you have physics.  Molecules tend to spread and move in a chaotic way. The very first cluster of molecules that eventually resulted in unicellular organisms (first without a nucleous and the with a nucleous) had to separate themselves from the ambient, get organised and maintain the organisation. That required an infrastructure to move molecules around delivering them to the right place, a way to manage energy to accomplish this and a way to dissipate the resulting heat. This is also called metabolism. After 2 billion years those unicellular organisms found a way to cluster in multicellular aggregations that again needed to organise themselves to carry out those very same basic activities. At a very fundamental way, metabolisms is both the indication of the working of life and a measure on how well it performs.

Kleiber studied the metabolisms of different organisms, unicellular, multicellular, up to mammals and made an interesting discovery. Living organisms are better than non living objects in balancing energy and this is because they are “organised”. This gives them an edge over non living objects ant that explains their success and evolution (from a purely physicist point of view). The metabolism of a bigger organism is bigger than one of a smaller one. A no brainer. The metabolism produces heat and this heath needs to be dissipated by the organism (otherwise it will heat up and … cook). Dissipation happens through the organism external surface, so it can grow with the surface (this means it grows with the square of the size). On the other hand, the heat is produced proportianally to the volume of the organism, that is it grows with the cube of the size. There needs to be a balace between production and dissipation and Kleiber observed that rather than growing in proportion of 0.66 (as you would assume given the square of dissipation vs the cube of production) the growth was in a 0.75 proportion. Something strange was going on. More recently it was discovered the reason: the dissipation effectiveness is increased by specific infrastructures that actively move heat from inside the cell and from cells to the outer surface.
An unrelated, but strikingly similar observation can be made of cities. If you look at the wealth they produce (the city GDP) you’ll see that it grows, not surprisingly, with the size of the city. You’ll notice that different efficiency in infrastructures in different Countries lead to different pro capita wealth produced but if efficiency is the same in two cities the ration between the GDP and the size of the city is, again, 0.75. Well, it turns out that both in the metabolism and in cities infrastructures these have a fractal structure and the ratio produced by fractal structures is 0.75.  Mistery solved.
Heat dissipation infrastructures in cells are channels across which molecules are funneled; wealth is produced by cities leveraging communications (road) infrastructures and these are constrained by the geography and topology: you need to achieve a compromise between the lenght of the roads and their pervasivity and this leads, as in Nature, to a fractal structure. Issue closed? Well, not in the case of Smart Cities. Products based on atoms require a supply and distribution infrastructure that at best can have a fractal structure. But wealth developed by the digital economy does not have the constraints of the classic economy. Geographic distance is no longer and issue, distribution can be (almost) istantaneous. Hence, the challenge for Smart Cities planner is: how can we organise wealth supporting infrastructures that are more efficient than the ones used in classical economy?