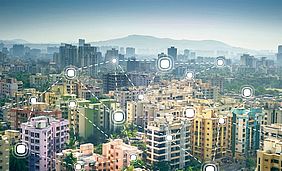 Moore’s Law has had a tremendous impact on electronic communications and, indirectly, on social communications. It has, also, been fueled by the telecommunication market that has provided in the last 35 years the “volumes” that have pushed the semiconductor industry to massively invest in research and manufacturing de facto making Moore’s prediction true. The demand for chips came first from the network (digitalisation of transmission, stored program control switches, fibre in the backbones, digitalisation of the last mile -ADSL, VDSL- fibre in the last mile, in this order) and then in the last 20 years from cell phones. Now this demand is fading away from the network side but it is still strong in the smart phones side.

HIgher capacity pushed towards better transmission media (like optical fibres) but also towards the capability to make the most out of two old time resources: copper and air (radio spectrum). Moore’s Law has affected them all.

The evolution has not reached the end of the line. We can expect an increase in overall capacity with no end in sight for at least the next decade. In this process, however, the economic value has shifted, as well as the rules of the game, first as de-facto and then as regulation. And more is to come.

Whereas the telecommuncations infrastructure in its first 150 years was Telecom Operators’ biz more and more we see:

Both of these trends are pushing towards public private partnership and towards an infrastructure resulting from the clustering of several local infrastructures. Municipalities can become players in the infrastructure arena through regulations steering the deployment and use of infrastructures and through direct participation in their development.

This is also made possible by the dramatic decrease in cost of infrastructure creation/deployment (particularly in the case of wireless infrastructures).