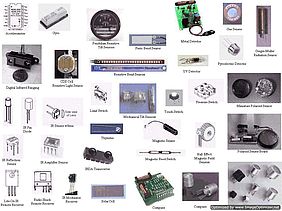 There is an astonishing number of sensors, in the billions, already today. And this number is growing exponentially to reach several hundred billions in the next decade. It is not just the number growing, it is also the variety of parameters that can be sensed. In the figure a representation of the variety of today's sensors. Credit: Electrical4u

Transistors have reshaped the electrical communication infrastructure making it more affordable and more flexible. This latter was the result of digitalization, a trend started in the 1950ies and now ubiquitous. Bits are bits and scientists have found more and more ways to convert basically “everything” into bits, be it voice, images, sounds, strings of codons, traffic flows, diseases spread, people’s mood. I’ll consider the economic impact of this digitalisation later on. For now let’s consider the technologies that are making this digitalisation possibile because they have a strong influence on the path towards smarter cities. What you want, as a municipality, is to create a digital image of your city, of its citizens and of its processes.

Presenting an overview of current and future technologies used in “sensing” would require a long time so many and varied they are. Knowing fully well that I can only provide a glimpse into the sensors world, I will try nevertheleto provide a such an overview since getting the feeling of what is already possible and what is going on in this area is crucial to a smart city planner.

There are both analogue and digital sensors, meaning that the data provided can be in an analogue or in a digital form. The general trend is to either create data directly in a digital form or to process them locally, in the sensor, to deliver a digital data. So for our purposes I will consider digital sensors, even though in many cases the sensing technology produces an analogue sensing, but this is then translated into a digital data.

Even the classification of sensors into broad family is complex and ultimately subective. I chose to classify sensors in 11 categories as follows: