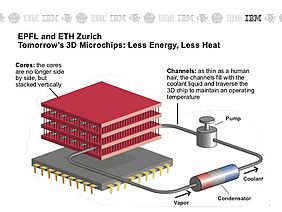 3D architectures and transistors stacking can further push the density of transistors on a chip without having to shrink their size. Credit: IBM and EPFL 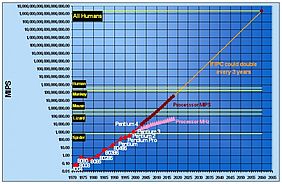 Based upon Moore's Law, computing power of an individual chip is believed to reach human brain capacity around 2020. Based upon extrapolation of Moore's Law, it is believed that one single processor will exceed all human brains in 2060. However it is much more likely that the increase in processing power will be achieved through massive distributed processing rather than in a single chip.

Looking ahead, beyond Moore’s law we see several paths that will take us to increased processing power and decreasing cost although no longer tied to better silicon manufacturing processes.

A few paths, possibly the ones closer on the horizon, are through

A different approach involves different non Von Neumann computers like quantum computers and/or different single atom layer materials (2D materials) like graphene and molybdenum disulfide. These are far away in time and are unlikely to affect the path towards smarter cities, although the industrial availability of 2D materials are likely to enable new types of sensors at much lower cost that can become part of any object. This ubiquitous presence of sensors and their intrinsic capability to perform local processing will be one of the enabler of the awareness infrastructure and this will have a crucial impact on the path towards smarter cities.

As a matter of fact what we are missing today is not the peak processing/storage capacity but the usability of this capacity. The barrier to this usability are mostly the communication barrier and the energy barrier.

In both cases the “beyond Moore’s” has to help. The evolution towards 5G and the networking at the edges promises the possibility to harvest both computational and storage power from smartphones, something that should be leveraged by future smart cities. Second, the lower power requirement (and better recharging possibility) should enable the usage of spare processing and storage capacity in smart phones creating a “Cloud in the Fog”, that is harvesting citizens’ smart phones capability to serve themselves as a community. Assume a city with 100,000 citizens having a smartphone, each smartphone having 1TB of storage capacity and a processing power of 20,000 MIPS (this is a conservative assumption: an iPhone 5s has 20,100 MIPS of processing power. In the next decade we can safely assume an average power of smartphone in that range). We can expect these smartphone to be used some 10% of the time (again a conservative assumption, meaning 2h and 24’ per day) and a spare storage capacity of 100GB (a 10% of storage capacity not used). This leaves a “shareable” capacity of 10Petabytes and a processing capacity of 2 billion MIPS, that is -roughly speaking- the capacity of a supercomputer or, again roughly speaking the processing power of a human brain. Roughly means that it is intended to give an idea. The comparison among massive distributed computing such as the one that could, and will, be implemented in the “fog” is quite a different beast from the processing going on in a supercomputer (even though a supercomputer is a cluster of million of processors). Likewise the comparison with the processing power of a human brain (even though here too we see a massively distributed processing structure).

The point I am making is that a smart city by leveraging on the distributed power of hundred of thousands of devices, like smartphones, cars, tablets… can harvest a processing and storage capacity that is “au pair” with the one provided by a supercomputer and it can do that basically for free as long as it can provide a connectivity infrastructure like the one envisaged for 5G (and beyond).

The other point I am making is that this tremendous processing power, that will keep growing year after year, can provide some form of “intelligence”, similarly to what processing accomplishes in a human brain. And I will go even further claiming that this is actually a first layer of emerging intelligence that can become the bases for further layers of intelligence and awareness, as I will detail later on.

Going back to the evolution towards lower power requirement, this should enable the powering of a broad class of IoT devices, mostly sensors, and their use in the city environment at an affordable cost.