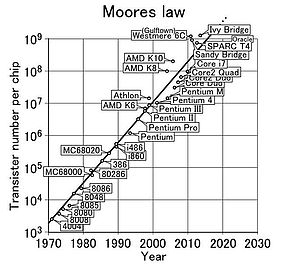 The number of transistors per chip has kept growing, reaching 7.2 billion in 2016 with the itel Broadwell EP-Xeon. Credit: Scoopnest 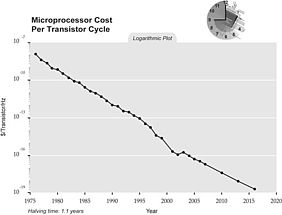 The cost per transistor cycle has kept decreasing, halving it every 1.1 year, faster than the Moore's law. Credit: Singularity.com

The need for power has kept decreasing, now being in the µA range when functioning and in the nA range in stand by making scavenging a possibile source of power. Credit: Huawei

A special focus is needed on the data fabric: I did not mentioned it as a separate infrastructure in the previous classification even though I hinted that data are a basic component of the service infrastructures. Indeed data can be seen more as a pervasive fabric, serving several infrastrutures. It is relatively new although data were always present. What is new is their abundance and the technologies we have to “use” them. Because of these they are becoming a strong driver in a smart city evolution. Besides, this fabric provides a perfect link between a city and its citizen. Citizens can become intelligent sensors and active players in the city operation and evolution contributing to the strenghtening of the data fabric. At the same time the data fabric can increase the awareness of the citizens on their city.

As wrapping up we will consider the impact on the economy (bi-directional) and the transformation of the economy from a pure atom based economy to a bit economy (today) towards a data economy (tomorrow).

The Moore’s law is probably one of the most cited empirical laws in these last 30 years. It goes back to a paper published in April 1965, so it is over 50 years old but its relevance became visible in the 80ies as chips became more and more powerful and cheap. It is basically predicting the capability of the semiconductor industry to squeeze more and more transistors in a given surface, their number doubling every 18 months. It is also stating that the manufacturing cost will remain the same per surface unit, hence the cost per transistor (which loosey equates to the cost per functionality) will be halved every 18 months.

The increase of the number of transistor on a chip is what made possibile ever more powerful computation and ever more sophisticated functionalities. However, what really made the difference was the second affirmation of the Moore’s law, the decrease of manufacturing cost. This is what made computation affordable and hence ubiquitous. This is the reason why today’s cities have plenty of distributed processing around, making traffic light smarter, power distribution seamless, waste management effective and more. Actually a large city today would come to a stand still if processing where no longer possibile, as we have seen happening in those situations of power outage.

There is yet another corollary to the Moore’s law that has a strong implication on the increasing smartness of our cities: the ever decreasing use of power. We are now reaching a point where electronic circuits can be powered by very weak sources of energy, so weak in fact that one can use scavenging as a source of power, thus getting rid of the need for power supply. Electromagnetic field in the ambient, vibration produced by vehicles, temperature differences are getting sufficient to power sensors making it possible the monitoring of a city as never before.