Shortcutting the brain to the hand 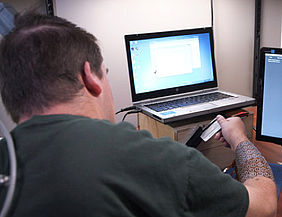 Converting the processing going on in his brain to signals for the muscles of the hand a paralysed person can swipe a credit card for the first time after many years. Notice the array of electrodes on his arm. Credit: The Ohio State Wexner Medical Center and Battelle

A quadriplegic man, paralysed after a diving accident, was able to perform a number of movements with his hand for the first time after the accident. Take a look at the video clip to see the amazing result.

This was made possibile by the work of a team of researchers at the Ohio State University and reported on a Nature article.

This is the first time that real complex movements have been made possibile by interpreting the electrical activity going on in the brain when the patient "think" about moving the hand to perform a certain action and converting this electrical activity into electrical signals that conveyed by electrodes to the muscles in charge of executing the hand movement.

There are several complex steps that need to be completed to make this possibile.
First a computer has to identify the action that the patient wants to perform with his hand by decoding the electrical activity in the brain. This is very complicated and is not solved in general. What happens is that the patient is trained to thinks in such a way that the computer can understand what he is after. In theory one could say that the patient would be better off in voicing what he wants to do, like "pour the water from the bottle". It is surely easier for a computer to understand such a voice command than to derive the command from the electrical activity in the brain.

The next complexity is to convert the intended movement into coordinated electrical stimulation of the muscles resulting in the intended action. This is quite complex since any movement is the result of a highly synchronised interplay of the various muscles (34) in the hand.

This is what the researchers have managed to do.

There is still another complexity to be solved to replicate what happens in a normal person: provide feedback to the brain on what the hand is doing to adjust the movement. This is something the the researchers have not managed to do in this experiment. The patient had to look at his hand to see what was going on and adjust the following movement instructions accordingly.

The more we try to replicate a failed functionality and the more we appreciate the intricacy with which we cope every single day without giving it a second thought.

Behind this result there is a lot of science, of medicine but there is also an amazing amount of processing and software sophistication. ICT is really an enabler everywhere!