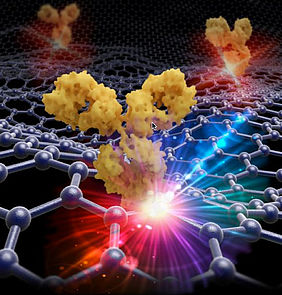 The EU graphene flagship project is moving forward under the leadership of EPFL. And from EPFL we are now getting the news of a first device exploiting graphene properties to sense single molecules.

Graphene has very peculiar, and interesting properties, that promises significant advances in many areas, from new kind of semiconductors that might eventually replace silicon and further the evolution (now that the Moore's law is slowing down and breaking out), create more effective water purifiers, create much more resistant materials, make new ultra high resolution displays and so on.

However, so far it has remain at the stage of promises supported by some nice prototypes working in a lab.

At EPFL a team of researchers in cooperation with colleagues at the Institute of Photonics Systems in Spain have been able to use graphene to perfect a well known method to identify molecules: infrared absorption spectroscopy.

If you beam an infrared light onto an object there is an energy transfer to the atoms that vibrates in a way that is specific to the kind of atoms. This vibration is measured as a change in wavelength in the reflected light.

The infrared light has a wavelength of 6µm, whilst a single molecule is a thousand times smaller (approximately, depending on the molecule). Hence the infrared light when hitting a molecule moves around it and any "reflection", if any, is basically impossible to detect. Unless you have billions of them there is no way of "sensing" what they are.

Using graphene like a sort of "net" and giving it a specific geometry the researchers have been able to create a sort of amplifier that captures the vibration of a single molecule and extend them to the all graphene layer.

Actually, it is even better. The light beam when hitting the graphene layer induces oscillation on the electrons on the surface of the graphene (plasmonics) and this in turns affects the molecules that starts vibrating in a way that is specific to its electrons bonds (the way the atoms forming the molecules are attached one another).

Hence it becomes possible to have a sensors at nanometric scale that can identify a molecule and can also tell how the various atoms bond together in that molecule.  This is completely new, never before it has been possible to explore "inside" a molecule at the electrons and bonding level.

This turns out to be an amazing way to probe biomolecules and opens up the way to deeper understanding of bio-structures (where the "geography and architecutre" of the molecule is even more important than its chemical formula).