SCHAFT is good, but I am better! 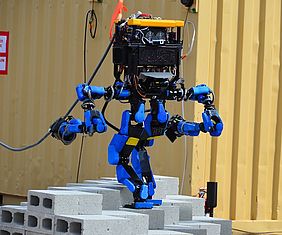 The SCHAFT humanoid robot that won the DRC in December 2013. It is a humanoid in the sense that it resembles a human body but if you look well it has something that no humans have: a power cord! Credit: SCHAFT

In December last year, just before Christmas, SCHAFT, a robot developed by SHAFT, a Japanese company recently bought by Google, won the Darpa Robotic Challenge, clearly defeating the other contenders.

The robots competed over 8 different tasks and SCHAFT won 4 of them totalling 27 points, the second won 2 and got 20 points in total.

So you can say that SCHAFT is good. It is a humanoid robots since it is bipedal and can surely resemble a human being, and in some activities I can imagine it may perform better than a human being.

However, if you look closely, SCHAFT needs something that I, and you, don't: a tethering power cord to provide power to its muscles (special motors that thanks to a fluidic approach can deliver the same torque and strength of human muscles).

And this is a big difference that it is not going to be solved in the near future. We are bring along our energy reserve in terms of sugar (glucose) and fat and each of our cell is an energy transformer that is capable of making use of the energy it needs to perform a specific function. Our muscles work through the contraction of each cell and each cell takes care of the provisioning of the required energy.

So this is what I meant by saying that I and you are better than a robot. It is the way we manage energy and transform it to power our body that singles as apart (and all living things for that matter).

We are also far more effective in the use of power: our brain can perform computations that would require a supercomputer to match but at an infinitesimal fraction of the power. The fastest supercomputer, Thiane 2, has a power consumption of the order of 10 MW, whilst our brain is in the 20W range, that is 500,000 times less than the computer. True, a supercomputer can process in a second mathematical additions that would take 1,000 people 6,000 years to crunch (and that is way more than 500,000 times faster) but who cares about doing all that math!

Even though there is a consensus that the singularity might be near (in two decades a robot might outsmart us) I am doubtful that we will be seeing humanoid robots untethered able to perform as a human being, eating just once a day!