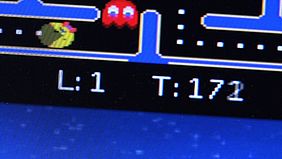 But now imagine that your robots become obsolete (as your cell phone, your computer has) and you want to get a spanky new one with all those new features your never imagined before but that now you can't live without (sounds like a deja vu?).

Well, you will have to re-instruct your new robots about your home, your food, your shirts... Quite time consuming and probably sufficient to thinks twice before replacing your current robot.

Now researchers at the Washington State University have developed a software that should be embedded, in their view, in any robot, as today all devices (most of them) have Bluetooth software embedded. This software provides robots with the capability to teach and to learn.

Hence, your "trained" robot will be able to teach the new robot what and how it should operate, relieving you from all the fuss.

The researchers have demonstrated the software with one robot teaching the other how to play Pacman. The interesting thing is that the teaching mimics the kind of relationship and interaction between a teacher and a student. The point is that the teacher should help the student to develop his skill in a creative way so that eventually he might become better than the teacher. This will not happen if you where teaching in a prescriptive way because you would basically have the student replicating your actions.

The same applies to robot teaching another one. If you were to use a prescriptive approach the new robot will not be able to leverage on its increased capabilities; your new robot will behave exactly as the old one, so why change it? With this approach, on the contrary, the new robot may become better than the old one, keeping nevertheless into account your preferences.

Indeed, this has proven to be the case in the researchers experimentation: the new robot ended up being better at playing Pacman than the old one, even though it learned from that.

Now isn't this nice? Yes it is but at the same time reading the news from the University of Washington made me wonder if this capability is not opening up a can of worm. What if the robot I got will start learning from a mischievous one (may be not accustomed with the three laws of robotics) and disrupt my life? What if my nice robot that served me so well get in contact with another that will teach it (him?) some tricks that would make my life miserable?

Uhm, the lights and shadow of technology evolution...