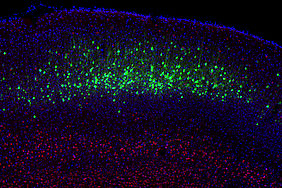 Neurones of the cerebral cortex targeted for reprogramming are displayed in green. Credit: Caroline Rouaux/Arlotta Lab

Just few weeks ago I discussed ideas for a long term future where one could imagine to upload one's brain to the Cloud, just in case. And of course once a brain is in the Cloud one can use it in cyberspace or download it on a physical brain (the original one or potentially a brand new one) restoring the previous state.

The discussion stemmed from advances in monitoring the brain at neurone level and clearly was a 1% science and 99% science fiction. However, if a complete upload of a brain (the 99% related to science fiction) is well past our present scientific horizon the upload of a few neural circuits is within current science possibilities.

Now I read of a paper, published on Neuron, where Harvard Stem Cells Institute researchers describe a method to reprogram and rewire a brain. This would provide the technical means to close the loop: we have technologies to detect neuronal circuit state at the neurone level (hence we can make a copy in the Cloud) and now it has been shown that we can replicate such a circuit state in a brain by conditioning a number of neurones and by rewiring them to create the desired circuit.

This is really amazing. For the first time we have a trail to explore that might, it is just a might so far, lead to a cure for psychiatric and neurodevelopmental diseases, like schizophrenia and autisms.

“What we’ve shown here is that not only neurons can be dramatically changed from one type into another from within the brain, but also that neighboring neurons recognize the reprogrammed cells as different and adapt by changing how they communicate with them. Transformed neurons were recognized as ‘new’ cells, with different properties, by neighboring inhibitory interneurons, which in turn created new circuitry appropriate for their ‘new’ neuronal target.”

Let me repeat, it is a might, a situation like back in 1947 we had a transistor and someone would have said "now the way is open to create an iPad"!

We have probably moved from 1 to 2% of science and from 99 to 98% of science fiction. A tiny progress indeed but nevertheless and amazing one!