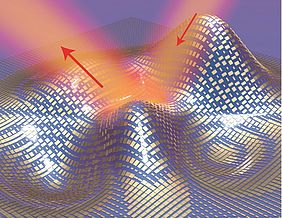 This image shows a 3-D illustration of a metasurface skin cloak made from an ultrathin layer of nanoantennas (gold blocks) covering an arbitrarily shaped object. When activated, light reflects off the cloak (red arrows) as if it were reflecting off a flat mirror. Credit: Image courtesy of Xiang Zhang group, Berkeley Lab/UC Berkeley

Mercedes-Benz created in 2012 an (almost) invisible car for a new commercial to promote a vehicle that uses F-CELL hydrogen technology. It uses a Canon digital camera and LED panels.

Ever heard the name of Harry Houdini? He was a US magician who lived around the turn of the XX century (1874-1926) who made history with his magic capability of making objects disappear. Of course he did it with tricks, but if you don't know the trick... it is just magic.

Now scientists at the US Department of Energy and University of California at Berkeley have come up with a way to make objects invisible by using a ultra thin cloak that makes the object invisible under sunlight (normal light).

The cloak is made using gold nanoparticles just 80nm thick (thin, actually) that are organised in a way to absorb (not reflect) any incoming light. The cloak is so thin that can be layered onto any object, perfectly following its surface.

Since the light is not reflected you no longer "see" the object.  However, this does not make the object "transparent" so in reality you cannot see the object but you see that something is "occupying" a space.

This result is interesting since it shows that scientists can now engineer a "meta-material" whose properties are not derived from it chemical composition but from the structure designed at a computer. Meta-materials, and not just in this "invisibility" area, will play a significant role in the next decade where objects will be designed based on the desired characteristics.

By the way, there have been some ingenious experiments to make an object "transparent" by using cameras and transforming the object surface into a screen onto which project what it "behind it" but so far the technology is still in its infancy.

All in all, Houdini still wins (but he cheats!).