Recycling vs Economics vs Culture 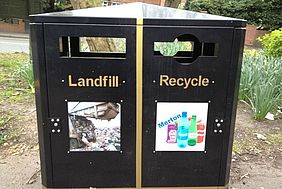 Landfill vs Recycling is often an individual decision and as such is tied to that individual culture, whose is strongly influenced by the dominant Social culture. Photo credit: Jeff van Campen; FLICKR.COM/CC/BY-NC/2.0

Most of us do not perceive garbage as a big deal. This is because there is a quite sophisticated infrastructure that makes garbage collection and treatment seamless and so effective that it disappears from our perception. We get to terms with garbage when there is a glitch in the working of this unperceived infrastructure and all of a sudden everybody screams at our cities landscape getting ruined by rapidly accumulating garbage.

The working of that infrastructure costs quite a bit of money (I pay some 400€ per year - a 4 people family- for garbage collection and management in Turin, but this does not completely cover the cost that is estimated for a family of 4 around 800€) and this cost in many cases is decreased by recycling. In the past years somebody even claimed that we can offset all cost, and even make a margin, by a careful management and recycling, like generating electricity from the burning of the waste or reselling plastic, glass and paper to be reused.

Indeed some of the cost can be offset by a careful management -and recycle- of waste but it is really tricky. The waste we are producing changes over time in quality, not just in quantity. These changes affect the processing of the waste and can increase the cost since the processes in place are optimised for a certain mix of product waste. Another factor is the cost of energy from fossils and other sources that if it goes below certain thresholds makes harvesting of energy from waste not economically sustainable.

EWaste is a relatively new "type" of waste that is growing rapidly and this requires new ways of dealing -efficiently- with it sorting it out from the other types of waste. This is what EIT Digital, along with EIT Climate and EIT Raw Material, is addressing in a cross KIC project.

Also in this area there is the potential of offsetting (partly) the cost of its management by extracting and reselling raw materials that can be reused and by recycling the ewaste to a new life (like re-using a perfectly functional cell phone that has been discarded because it is superseded and no longer "cool"!).

Here we have a problem. For a phone that is not destroyed, but reused, there is one less phone that is sold. The recycling of phones at macro level results in a lengthening of each phone life time. Thus less phones needs to be substituted and this decreases the "consumption" of phones. Not a good prospect for phones manufacturers. This, clearly, is a fundamental issue of the Consumer Society that has been fuelled by Marketing pressure and has led to an explosion of production, in line with the increased production capability brought forward by the Industrial Revolution and its subsequent evolution.

In a world that is reaching saturation (third world Countries have now, by far, joined the Consumer Society) the lengthening of products life cycle, fostered by recycling, creates an economic issue. Of course many would say this is good since it means we are using less resources. I am not taking a position here, I am just pointing out that this creates an issue we need to be aware of and tackle.

This leads to the consideration that recycling is tied to economics and in turns it is tied to culture. These three aspects are influencing and are influenced by one another.

A broad view is needed to face the eWaste challenge.