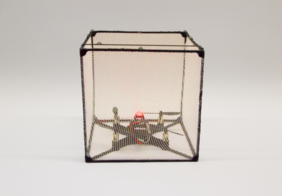 A microdrone, in shape of a tiny cube, can be aggregate with many others to create any shape. Credit: Queen's University, Kingston, Canada

I love to see science fiction morphing into reality. And this news is right there!

Researchers at the Queen's University (Kingston, Canada) have created three types of tiny drones that can aggregate to form shapes in space.
One drone has an outer shell making it resemble a wire-cube, with just the edges (you cannot have a cube with faces, that would make fly impossible). This drone in synch with hundreds of others can create, in a Lego blocks way, any object and have it levitating in space.

A second type of drone is equipped with a LED and it can create a screen as big as you like in cooperation with its siblings. A similar thing was designed a few years ago by Carlo Ratti's group at the Senseable City Lab, MIT, where they imagined tiny helicopters carrying a dot of light to create images floating in space.

The third type of drone carries a flexible screen (a very light one to let it fly) and a camera. This drone can be used to interact with a person.

Each drone can be tracked in space so that it is possibile to coordinate its flight with the ones of the others.

According to the researchers they can create a real reality, opposed to the virtual reality where no atoms is involved. It can make study of structures more engaging, it can help communication by following a person as he talks and showing at the same time his environment with drones at the other side of the communication line recreating such environment....

So far it just looks like a gadget, but it is an amazing one. And it shows the progresses that have been made on drones.