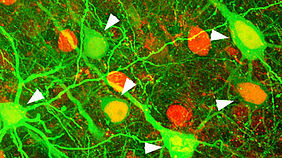 How does a brain recognise an object based on the signals transmitted by the eyes? We know quite a bit about the vision process but not enough to really understand how neurones process these signals.

This is what a team at Carnegie Mellon University is setting out to do with a funding of 12 million $ from IARPA over the next 5 years.

The first step is to follow, and map, the firing of neurones involved in the processing of visual signals and then to re-engineering this neural activity to emulate it in a computer.

Over the last decades, since the 80ies, computer scientists have created neural networks that are a mixture of specialised hardware (like the IBM chip SyNAPSE) and specialised software. The latest blending, the present wave of Artificial Intelligence, is sometimes referred to as Deep Learning (using both neural networks as well as convolutional deep neural networks, a variant of the former). This has led to some interesting results but we are still far from the effectiveness shown by a brain circuitry.

The research undertaken at CMU is part of the program Machine Intelligence from Cortical Networks which in turns is part of the US Brain Initiative. It is expected to have impact on both neuroscience and on Artificial Intelligence.

This latter, as the name suggest, was designed to mimic natural intelligence and its underpinning, the neural circuits in a brain. The problem is that it is extremely difficult to recreate the same topology and functionality of a brain since neurones have so many connections and part of them are creating feedback loops.

Advances in the monitoring of neurones as they process signals is making it possible to "see" what is going on and this opens up the door to a re-engineering of natural circuits into artificial ones. In particular the researchers at CMU are using a "2-photons calcium imaging microscopy", a technology that allows the monitoring of ten of thousands of individual neurones in parallel.
So far the experiments are run on mice brains looking at the way they are processing visual signals. There is a strong consensus that our brain circuits works in very similar ways to the one of mice, hence information derived from mice brains can be applied to ours.