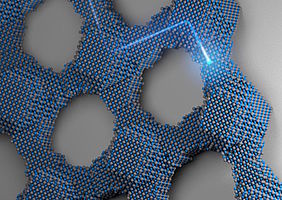 Imagine playing with Lego bricks each 5nm in size (for the record, to build a Lego brick using these nano-bricks you would need, roughly, 2 billion billions of them).

This is what researchers at Cornell School of Chemical and BioMechanical Engineering are doing.  In a paper published on Nature they report their results in creating a material made through the assembly on nano crystals (the nano-bricks). At this size you don't need any glued to keep the nano bricks together, they simply stick one another creating a larger crystal.  Each nano-brick is made of lead-selenium and all together they show electrical properties that are superior to the ones of any other semiconductor crystalline material (including silicon) created so far.

By manipulating the assembly of these nano crystals it is possibile to design a material with the desired energy bands. In lay terms, an atom as a bunch of electrons forming a cloud around it. Each electron has a very definite energy band in which it can operate (the Pauli exclusion principles tells us that two electrons cannot occupy the same space - by the way this is the root cause that hitting an object is so painful, your foot electrons cannot mix with the door jamb electrons...). The energy bands of a material, however, are the result of the superposition of billions and billions of single electrons energy bands.

These energy bands determine the electrical properties of the material and by engineering the assembly of such small bricks you can finely tune the energy bands to suit your needs. Hence you can create materials with just the right characteristics to adsorb certain radio frequencies (or light wavelengths...) increasing the efficiency of electronic components, something that is crucial in IoT where energy efficiency can make the difference between cost affordability or not.

Again, another example on the power of nano-tech that will change our world in the next decade.