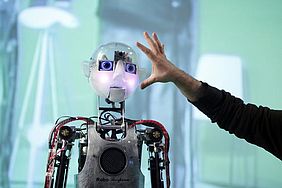 Google is working with NASA on Quantum AI and has created a joint lab investing many million $, and seeing what they did in the area of self driving cars you have to give them credit... They are using D-Wave quantum computer for their work.

Now, researchers at the University of Madrid and University of Innsbruck (Austria) have published a theoretical paper aiming at bringing quantum computing approaches to let robots learn about their environment and take smart decision.

Their claim is that current AI technology fall short in supporting a real time assessment of the variety of parameters and knowledge embedded in an ambient, something that is required to take decision on the go.

Quantum AI, according to the researchers is the way to go to let the robot "brain" develop models of the ambient and be sort of "creative" in taking decision. Actually they say that the very activity of developing a real time model based on the understanding of the ambient is a creative endeavour something that is not supported by present classic computer architectures and paradigms. Hence their drive towards Quantum AI.

It reminds me of the debate started in the mid 1990ies by Sir Roger Pemrose, of the theory of Orchestrated Objective Reduction, Orch Or, in which quantum (vibration) mechanisms were a fundamental part of the brain working and the process of consciousness. This theory have found some experimental backing last year with the discovery of quantum vibrations in microtubules inside neurones. Notice that although there have been strong opposition at that time to the idea of quantum mechanics being involved in brain processes and cognitive processes because of the unlikelihood of keeping quantum coherence in a warm and wet mass like a brain, several studies, now accepted and experimentally confirmed, have shown that quantum processes are actually at the core of several Nature processes, like photosyntheses, vision and bird orientation....

Nice to see how theoretical physics brings head scratching issues to the fore of our everyday life!