Pushing Selfies to a new hight 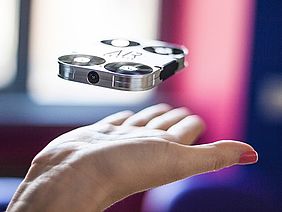 A mini drone designed to fit the palm of your hand and take off from it to take a selfie of you! Credit: AirSelfie 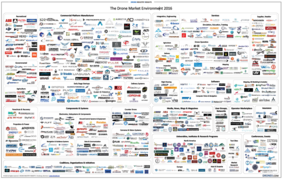 The drone market is growing fast. Here a map of 710 companies operating in such market. Credit: Drone Industry Insight

A UK start up is seeking for funding on Kickstarter to develop a mini drone, as big as your smartphone, that you can use to take selfies.

They are showing it fitting in a special cover you can use for your smartphone. When you feel the urge to take a selfie you slid the drone out of the cover and you control it with your smart phone.  The connection with the smartphone is established through a WiFi network generated by the drone itself. It will hover on the spot you see better fit your artistic whims and you snap the selfie.  An onboard camera with a 5Mpixels sensors takes photos (up to 8 per "mission") and video clips, up to 20 minutes, stored in a 4GB memory. Unfortunately, the on board battery can sustain the drone in flight for just 3 minutes, then you need to recharge it.  On the other hand you can also use the drone as a fixed camera, and you connect it to the mains for continuous filming.

On Kickstarter they are "pricing" it at 179$, including the cover (the final market price is expected around 250$). They expect to ship the first AirSelfie in March 2017, with full production in April 2017.

Now, this is clearly a gadget (for some of us an expensive one), and one might even dispute the need for such a thing. To tell the truth they are listing a number of "exciting" uses, like taking a selfie of yourself from up to 20 m away, or a group selfie, or taking a snapshot of a monument from its top ...

Yet, I find amazing the capability to create a controllable flying drone in such a miniature scale, able to create a WiFi network, taking photos and video at that price. It is also sort of amazing to see that we are exploiting the "space" in so many different ways. Drones have invented a new market that was simply non-existant ten years ago, giving rise to hundreds of companies. In 2016 the drone market is estimated with a value of 2 billion $, and it is expected to reach 127 billion $ in 2020!