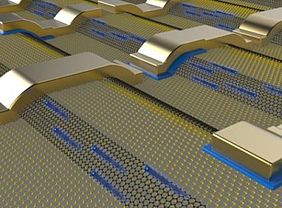 This is a conceptual drawing of an electronic circuit comprised of interconnected graphene nanoribbons (black atoms) that are epitaxially grown on steps etched in silicon carbide (yellow atoms). Electrons (blue) travel ballistically along the ribbon and then from one ribbon to the next via the metal contacts. Electron flow is modulated by electrostatic gates. Credit: John Hankinson 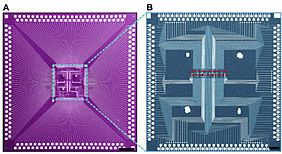 Fabricated nanoelectronic chip. (A) SEM image of the final chip (scale bar, 500 μm). (B) SEM image of the inner layout of the fabricated chip as indicated in the dashed box in A. The red dashed box region corresponds to the chip’s basic three-tile circuit shown. (Scale bar, 100 μm.) Credit: Jun Yao et al./PNAS

As technology progresses you reach barriers that hampers any further progress. However, these barriers are, so far, not physical barriers, scientific principles that cannot be violated. Rather, they are the result of the approach taken and once you reach them you need to change the approach to move further. I presented an example just few days ago discussing the use of DNA to create, bottom up, a chip, rather than using etching.

Now, I have stumbled upon two other news, with two different approaches although both based on nanotechnology.

The first relates researches carried out at the Georgia Tech Institute and published on the Journal Nature on a way to create circuit by using graphene nano ribbons, 40 nm wide, (as shown in the figure) that allows the transport of electrons as if they were photons in a waveguide in what is called "ballistic transport". This means that electrons can move with basically no resistance (leveraging on quantum properties) at room temperature. A significant step to increase speed (getting rid of the problem of heat).

It is actually more than just showing that you can have ultrafast electron transport. So far scientists have tried to re-create the band gap, typical of silicon in graphene substrate, since it is that band gap that makes transistor work, but this has proven difficult (in previous posts, last year, I reported on results that managed to show how to create a band gap in graphene). Now, Georgia Tech researchers propose a different approach: rather than trying to mimic silicon with graphene they show how to use graphene to create a transistor without a band gap. The problem that they have solved is how to keep electrons in graphene from scattering (getting dispersed) and this is basically the equivalent of creating a waveguide for photons. They have achieve a distance of a few µm, that seems trivial but compared to the distances we are talking about is huge and "usable". Since a transistor would have a dimension measured in nm, a transmission of a few µm means a thousand time that of the transistor, more than enough to reach another transistor (unless it is placed on the other side of the chip.... and this requires a different approach to chip design).

So, we are not there, yet, but we have another bullet in our guns to hit the bull's-eye.

The second news is a bout a nano computer developed by MITRE and Hardvard researchers measuring 0.3*0.03mm in what they claim to be the densest computer ever produced. It is composed of hundreds nano wires transistors each less than 20nm in length and functioning as a switch. They are assembled into modules (tiles) that exchange signals and perform computation.

The researchers are planning to use this nano computer, dubbed nanoFSM for nano electronic Finite State Machine, inside pills or insect size robots.

This is another example of nanotechnology. The nanoFSM is produced through a bottom up approach by assembling the various nano parts into a chip.