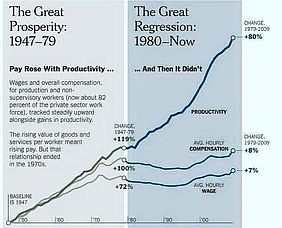 The link between productivity and salary has become loose in the 80ies and today we see a significant gap between the two. Credit: Economic Policy Institute

I stumbled onto a few graphics produced by the Economic Policy Institute (they are not new, published in January 2015) and then I read a few comments on the topic of the differential between increase in productivity and increase in wages.

What made me look for different points of view was the fact that till the 70ies the growth in productivity went hand in hand with growth of wages (we are looking at averages here) and then a gap started to emerge to the point that in the last 30 years productivity rose by 74% whilst wages grew by 9%. That's quite a gap.

Technology has also increased the availability of workforce thus decreasing their "value" (offer vs demand). It has increased the need of skilled -technology savvy- workers and made several low skill workers redundant. However, only a minority has managed to ride the crest of the wave, making themselves scarce and indispensable, thus raking bigger wages.  An the average tech savvy workers have fared much batter then the others but still lagged behind the increase in productivity.

We are often talking about a looming jobless society, and I posted here and there a few comments on that. The widening gap between productivity and wages is just another sign of this.