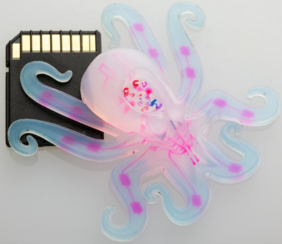 The Harvard’s “octobot” is powered by a chemical reaction and controlled with a soft logic board. It has been 3D printed. Credit: Lori Sanders

We have plenty of robots today, in all sizes and capable of a broad range of activities. Yet, the development of soft robots (something like...ourselves) is still proving difficult.

Researchers at the Harvard university have announced in a paper published on Nature the development of a soft robot, looking like a tiny octopus that can move around.

The robotic octopus has been created using a 3D printer able to print elastomers at different scale, from micro to macro, thus allowing the creation of a complex architecture that supports both the "engine" to activate motion as well as the moving parts (something that can compare to muscles and tendons/soft bones).

The engine is based on chemical reactions controlled through microfluidic logic (tiny pipes connected in specific ways to implement a desired logic). A catalytic decomposition of a propellant (hydrogen peroxide) generates gas that in turns flows into special vessels expanding them and leading to the motion of the "octobot".

According to the researchers this manufacturing approach can scale and can be applied to different types of soft robots.

Their next challenge? Make the octobot swim!