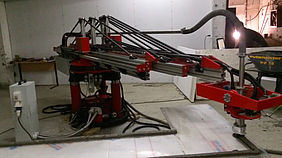 The Apis Cor 3D printer can print your house in just one day. Credit: Nikita Chen-yun-tai

Although it is not common, 3D printing of whole houses is not new. There are actually quite a number of 3D printers designed to print houses and a good number of houses have been 3D printed in the last five years.

In this sense, then, a new 3D printer for printing houses is not a news. What makes this newsworthy it that this 3D printer is so compact that it can be moved with a truck and can do its job almost everywhere.

Most of the existing 3D printers can print a house in a very short time, days, rather then the several weeks needed in normal construction business, but they need a special set up that is both costly and lengthy to set up.  They are basically big cranes that move on two rails. You need to prepare the area, lay out the rail and build the 3D printer on site, then you can start construction.

With the APIS Cor 3D printer, invented by a Russian engineer, Nikita Chen-yun-tai, everything is simplified.

As shown in the clip, this 3D printer is relatively compact and can be moved to the construction site by a truck and assembled on site in just 30'. Its span can support the building of a small house, roughly 60 square meters. The printing is completely controlled by a computer and the walls are printed in such a way to contain any plumbing a ducts required for the house infrastructures.  In 24 hours the house is ready for carpenters to install windows and doors, for finishing the bathrooms with sink, shower and tub and for decorating the walls.

The printing nozzle (the extruder) pivots on a central pillars that can be raised to any (reasonable) height, so that one can print high-rise houses.

Most important, the construction cost is just 30% of the one that would be required by usual construction methods. And this is what, particularly in developing Countries can make a real difference!