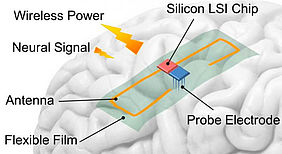 Schematic of proposed architecture of an implantable wireless-powered neural interface system that can provide power to implanted devices. Adding a transmitter chip could allow for neural signals to be transmitted via the antenna for external processing. Credit: Toyohashi University Of Technology

Transhumanism advocates that sooner or later the human race will "upgrade" itself by creating a new species with the help of technology. Someone sees in the gene manipulation a way to create a new species, others consider this as result of a symbioses between humans and computers (in one form or another).

They are both fraught with huge ethical issues, and both are "around the corner". It is no longer a purely academic discussion on souls and minds but a scientific discussion on "how".

The first path, gene modification, has in technologies like CRISPR an enabler. The main problem (one of many of course) is that we know how to change the genotype (the genes) but we don't know how these changes would affect the phenotype (what will be the result: e.g. we know that by changing a gene we can produce humans/animals with a different number of fingers/toes, but that single modification is also affecting reproduction capabilities, and probably much more).

The second path seems to be more manageable, like a brain implant that can create a new sense in an animal (or human), e.g. detection of electromagnetic fields. Of course, also in this area, there are many technological problems, one of them being the powering of the implant.

This is were this news, coming from Toyohashi University of Technology comes in.

Researchers have developed a thin film that can be implanted on the brain, capable of converting a radio signal into a DC power. It is nothing really new, RFID tags have an antenna that when exposed to a specific radio frequency generate sufficient power to activate the tag. The principle here is the same, what is new is the construction of this radio to power converter in a material that is biocompatible and that can be implanted on a brain.

In the article the researchers point to several possibile applications, none explicitly mentioning transhumanism, but each of them is actually extending human capabilities to a certain extent. Clearly, it is likely that this invention will be used in health care procedures first. No-one, so far, is really looking forward to have something implanted in his brain unless it is absolutely necessary. Nevertheless, I cannot help but wonder on the future of human beings in the second half of this century. I still remember an article I read few years ago, discussing threats in security titled: If it's possible, someone will try, f it's profitable many will try.