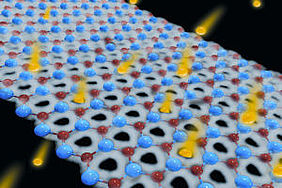 With a little tweaking, graphene allows protons to pass through it. Credit: the University of Manchester

Graphene, a one one carbon atom thick layer, is completely impermeable to atoms, including the smallest ones, like hydrogen atoms.

This is now being exploited to create a perfect anti-corrosion surface (since no acid, nor oxygen could reach atoms placed under a graphene cover).

Now, researchers at the university of Manchester, probably the leading hub for graphene research, have found that by using a bit of platinum nanoparticles protons can go through the graphene layer.

This does not diminish the anticorrosion shield since you need to have a full atom with all http://graphene-flagship.euits electron to activate a corrosion process. At the same time, having a layer of graphene that is permeable to protons makes it suitable to be used as a sieve.

One can extract protons (that is hydrogen atoms stripped out of their electron) from air, having a good and cheap way to extract hydrogen and thereafter use it as a fuel.

In particular, researchers are seeing this graphene layer coated with platinum as a crucial component to create much more efficient fuel cells. Today's fuel cells use proton porous barriers to combine oxygen and hydrogen, thus converting the chemical bond energy into electrical energy. These barriers are pretty thick today and this decreases the efficiency of the fuel cell.

Using a monolayer of graphene (or its sibling boron nitride) would increase the conversion efficiency.  Now the goal is to have an industrial production of graphene, the objective of the European flagship project for graphene, a ten year initiative with a European funding exceeding 1 B€.