Placing a video screen in our body 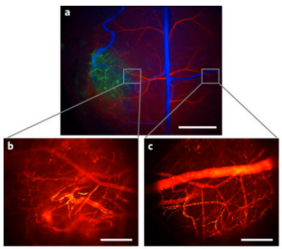 Medical imagining keeps making progress. It has improved dramatically in the last decades, thanks to new ways to look inside the body and the use of computers to make sense of the data captured.

We are now able to look at cell level using markers that fluoresce when the cell creates a specific metabolite. The problem is placing a camera close enough to the cells so that the light emitted does not get absorbed, what we need is to make the tissue covering the area we are interested in ... transparent.

This is what a team of researchers at MIT has managed to do! They have created quantum dots, the small particles that are used in top of the line video display as market. Quantum dots are also very bright, so the light emitted can be easily captured. The "color" of the light emitted by a quantum dot depends on its size and by shaping the quantum dot in a specific way the researchers have been able to create emission in the short wave infrared (SWIR: 1,000-2,000nm). At this wavelength the light is not captured by blood nor by tissues, which is equivalent to say that the tissues are transparent.

By placing a short wavelength infrared detector over the skin it is possible to "see" through the tissue the glowing quantum dots, hence to see the cells as they go about doing their job.

They demonstrated the effectiveness of their method by videotaping the flow of blood inside the organs of a mice as it moved around. The visibility is so good that it is possible to see single blood cell moving around and capture the direction of motion.

The crucial innovation is in the creation of the specific shapes and sizes of Quantum dot and in finding a way to bind them to the cells. In the experiments they used phospholipid micelles, lipoproteins and composite particles in various shape, depending on the target cells.

In the next decade it is likely that this technology will become a standard procedure, letting the doctor to look at our organs as they work, as if they were a television screen.