Peeking into the micro world with your phone 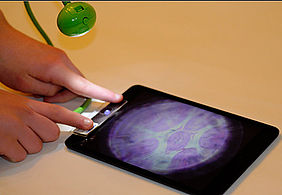 I have posted once in a while some news about adds on to transform your cell phone into a microscope. Although effective these adds on where a bit bulky. Now a young researcher just out of the Washington University is proposing a very simple add on you can stick on the digital camera of your cell phone (or tablet) and transform it into a powerful microscope with a magnification 150x, which brings you into the micro world (our eye can resolve 0.1 mm, so a magnification of 150x brings you into the sub micron resolution).

Thomas Larson, this is the name of the researchers, has sought for funding on Kickstarter to turn his research prototype into an industrial product, and guess what, he has succeeded.

It is not the first time he is turning to Kickstarter. He did it for a previous lens with a 15x magnification (and got the funding needed).

What is really nice is the simplicity: you stick the lens on your digital camera on the cell phone or tablet and place the specimens on it (better to use a glass slide). Activate the camera and you see on the screen the magnified image. Focus is obtained by moving the specimens closer or further from the lens.

Multiplying by 10 the magnification, with respect to the previous lens opens the door to applications in medical field, particularly in areas where no sophisticate equipment is available. With a sub micron resolution it is possible to distinguish bacteria.

It is also fun to see the world at this magnification and a straightforward application can be in education to better engage students.

The lens will be commercially available in September (in July to those who pledged on Kickstarter), with a cost below 50$ including the lamp, the lens and the glass slide to support the specimens. The 15x magnification is sold at 15$.

A different approach has been taken by a researcher at the Australian National University where he is using a polymer that gets shaped in a form of a lens by simply leveraging on gravity. The polymer is heated on a glass and then the glass is reversed so that gravity pulls the blob into a lens reaching up to 160x magnification and a resolution of 4µm.  What is great is that the cost for such a lens is 1 cent! The idea is that a cell phone equipped with such a magnifying lens can be used to take photos of a skin lesion ad send it for consultancy to a doctor, or it can be used by a farmer in his field to photograph a fungus or a tiny insect and send the photo to an expert to inquire if it is endangering the crop and if so how to take countermeasures.

Take a look at the video clip.

Amazing what one can do with a smartphone!