On the path to 5G 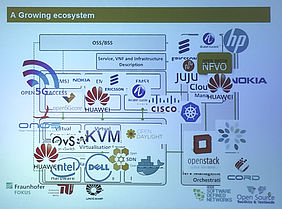 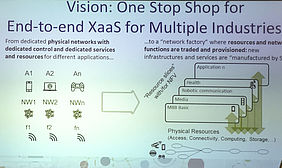 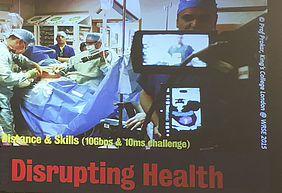 TeleSurgery is one area where very low latency is essential to provide the surgeon with tactile sensations. Credit: King's College

Yesterday I was at the EIT Digital-IEEE joint workshop, where we had the participation of academia, industry and research institute from several Countries each and all with a strong interest in fostering innovation of the whole ecosystem that is aggregating around the future communications and information infrastructures (telecoms and data networks alike), nowadays being clustered under the 5G banner.  SDN, Software Defined Network/Networking, is considered both as a component and as a starting point for developing new infrastructures paradigms.

IEEE is bringing to the fore a variety of technology areas through its 450k members, EIT Digital is bringing focused investment in both infrastructures evolution and verticals (services and products) in coordination with European Cooperation programs.

IEEE has the goal of creating, maintain, expanding an SDN catalogues including software modules, test suites, testing apps leveraging on its broad audience. EIT Digital has the goal of making an ever growing open test beds cluster accessible to any companies developing innovative services and products leveraging on open network resources.

There are several components to the undergoing effort, spanning from solving technical issues to creating the business attractiveness.

The SDN Initiative, started by the FDC in 2014, has been designed to foster growth and development of flexible infrastructures that leverage on what exists decreasing CAPEX and accelerating deployment. The flexibility is also supporting a decrease of OPEX. More important, the flexibility in exploitation and insertion of new network and edge resources is expected to bring to the big connectivity infrastructures the same pace of evolution that we have been seeing over the last 3 decades characterizing the edges (consumer electronics).

The FDC Initiatives has found in the EIT Digital focus on infrastructures evolution an ideal match in terms of objectives and complementary players and resources.
The creation of Open Federated Testbeds pursued by EIT Digital creates the physical underpinning to the FDC Initiatives and a way to “peer revue” the catalogue entities.

The Open Federated TestBeds (OFTB) should strike a compromise, as dictated by the CAP Theorem: you cannot get complete Consistency, Availability and Partition tolerance in any Distributed Computer System.

There are several efforts going on under the 5G umbrella comprising the Mobile Edge Cloud (MEC), like Openfog, IEEE OMEC, ETSI/MEC, OEC.

The Edge is the fundamental component in 5G and this is the key candidate for the OFTB.

The workshop had to answer the questions of:

The Catalogue idea has stemmed from the presence of many initiatives that are creating materials for supporting SDN experimentation and trials (seven have been tracked, all connected to 5G). Rather than reinventing the wheel a catalogue can be a very important starting point for researchers and industry to reuse what has been produced in this area.

The Fraunhofer Institute has created an internal catalogue for what they have/are producing and is making money by selling it as a service (coupled with consultancy). Clearly a world wide catalogue would be richer; at the same time its monetary exploitation is trickier as well as its management.

The Catalogue would serve both the researchers community as well as Industry, accelerating innovation and experimentation; additionally it would avoid (or at least decrease) the generation of multiple paths leading nowhere, since one would have the full picture available of what has already been explored and the results obtained. This does not decrease the innovation push, quite the contrary, since innovating will take place on previous experience.

A Wiki toolkit is available as part of the IEEE Service Infrastructure. Most of the work for this first release took place at Fraunhofer Institute in Berlin.

A crucial issue is how to keep the Catalogue current and “trusted”. Resources are needed and the current approach is to ensure this thru a community endeavor, however this may not be sufficient, particularly in the first phases till a critical mass is reached.  Achieving this critical mass is something that IEEE needs to focus on.

In this novel paradigm  the concept of “federated” testbeds becomes a crucial enabler.

Over The Top, OTT, are likely to ride on this paradigm operating their services on a distributed cloud.

Major European Operators are working on a 5GEX Testebed (Sandbox) that is shaping up as a Federated Testebed.

EIT Digital has been working on SDN as part of its focus on fostering the evolution of the ICT Infrastructure. Part of this, over the last two years has been on clustering a few testbeds that are supporting SDN testing and more recently in creating a single access gateway to them, based in San Francisco.  The access gateway is accessible on line.

To progress further it is essential to involve users both as potential revenue generators and as a way to assess the interest of the services delivered by the test bed. An activity working on these topics is run under the CC4BA project (Certification Lab).

Furthermore EIT Digital is running the SoftFire project funded by the EU aiming at the exploitation of test beds by SMEs having the need to run trial of innovative products on a future network.

The economics sustaining this goal are quite clear. There is an expectation that the SDN market will reach 132.9 billion by 2022 (Allied Market Research), with an average growth of 47% in the coming years, with the NFV market showing even bigger figures.

It is expected that a growing ecosystems will be fueled by these economics, with a major share taken by SMEs.

The interest of Telcos incumbent is on open standard interfaces that would allow a new variety of vendors to increase competition (on the vendor side) and quicken the pace of evolution.
All of the above reinforces the need for Federated TestBeds.

At King’s College researchers are working on tactile interfaces that can be operated across a network.  Tactile sensation places very tough requirements on latency, so hard, in effect, that in some applications the physical distance, even in the presence of zero network latency (the one introduced by the network operation), becomes a hurdle (because of the electromagnetic filed propagation time).

For the former they are looking at 5G as way to decrease network latency to a minimum, for the latter they are looking at decentralizing some operations in the (nearby) cloud, using models that can implement locally what cannot be done remotely. Decentralization is going to be crucial in “skipping” the core network, something that will be required in the future for some applications, moving functions from the core network to the edges and processing signals in the cloud at the edges (MEC).

As application areas they are looking at remote surgery and cinema immersion with artists and engineers working hand in hand.

SDN can be an interesting tool to allocate network resources, in the core and at the edges, to contribute to the latency problem solution.  They have created a Haptic Service Testbed in cooperation with Ericsson that will be further extended as more 5G technologies are being tested.