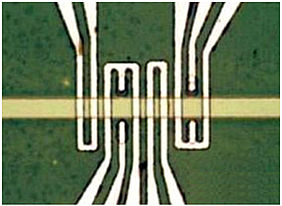 The transistor is now 67 years old and the ones we have today have very little resemblance to that germanium based transistor invented in 1947 at Bell Labs. Progress have taken many routes, first changing the germanium with the silicon, then creating a process for mass production and for integration (wafer), then perfecting it over and over.

Researchers are still at work in bettering both the transistor as such and the manufacturing process (the latter being usually more important in terms of innovation). Examples are the works carried out to substitute silicon with graphene and other materials.

Researchers at the UCLA have come up with a proposal to use a new class of magnetic materials called "multiferroic" that have interested properties, particularly with respect to the extremely low use of power.

In a silicon based logic gate transistor the value of the input signal(s) is processed and results in an output signal through the presence or absence of a current of electrons. The problem with having a current of electrons is two fold. First, any current going across a material (unless it is a superconductive material) generates heat, that is energy is being wasted. Second, the current of electrons leaks to a certain extent and that creates the need to space circuits from one another. Both heat and leaking hampers further densification on the chip.

Multiferroic materials have the property of switching on and off through change of voltage, i.e. they do not need a current of electrons. the signal is transferred from one logic gate to the next via a "spin wave bus", with no current involved. A wave is a field and although electrons are involved locally, they do not need to move. It is like a wave in the ocean. You see the wave moving although the water molecules don't (well, they go up and down but they don't need to move along the direction of the wave). You can easily see the difference between a current that makes boats drift and a wave that just make a boat bounce a bit but it remains where it is.

The researchers are proposing a novel substrata for processing where electrons current is replaced by spin waves. The power consumption could be decreased 1,000 folds and speed of processing could also benefit.

However, we are still far from a change of paradigm since one has to create an industrial manufacturing process that can produce multiferroic based chips at the same level of integration achieved for silicon chip and with comparable cost effectiveness. Here the road is uphill since silicon chip manufacturing has benefit from over 50 years of evolution. Nevertheless, it is always interesting to see that there can be a different way of doing things than the one we have got used to take for granted.