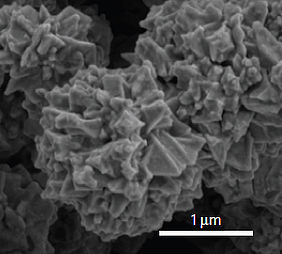 Researchers at Stanford have invented a battery that can self protect from overheating.

As battery release energy (electrical current), as well as when it recharges, the internal resistance to current flow and the chemical reactions going on generate heat. Above a certain thresholds the risk of explosion comes up, and unfortunately we have seen a number of cases of battery explosion in PCs, cell phones and even airplane batteries.

The approach taken at Stanford is interesting. It leverages on material science and nanotech.
The conduction inside the battery has been implemented using a polyethylene foil covered by nickel nanoparticles in turns covered by a graphene layer. This ensures a very good conductivity (low resistance, low heat production and good heat dissipation). As the chemical reaction inside the lithium battery generates heat the polyethylene layer expands and the nickel nano-spikes get separated thus blocking conductivity and stopping the chemical reaction before temperature reaches a critical point.

It is a physical process that automatically results in the control of temperature. By designing nickel nanoparticles differently one can determine the temperature thresholds above which the conductivity stops.