My eReader keeps me awake... 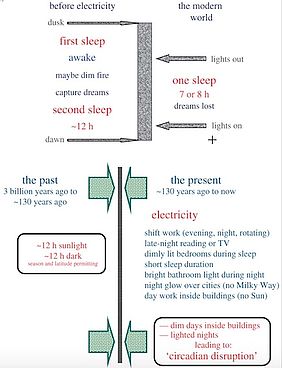 A comparison of exposure to light and .. dark, as it used to be for million years and how it is today, with possible impact on sleep. Credit: Richard G. Stevens , Yong Zhu/Philosophical Transactions B

A study published on the Neuron Journal seems to prove what I have known for quite a while: my eReader keeps me awake even after I put it away!

Neuroscientists at the UT Southwestern medical center have identified the neural circuit that regulates the circadian cycle, that alternate of sleeping and awake periods that characterise our day. We have known for a while that in the SupraChiasmatic Nucleus, SCN, in the brain there is a sort of clock that regulates our daily activity although we have not been able to find this clock. Now the neuroscientists have found  a small number of neurones that by emitting a neuropeptide (neuromedin S) effectively regulate the circadian cycle.

They also found out that these neurones are affected by the presence and absence of light and by the type of light our eyes capture.

We have evolved over millions of years under a sky that brightens up in the morning and darkens in the evening. During the day the light spectrum leans towards blue (shorter wavelengths) whilst at sunset it leans towards the orange and red (longer wavelengths). This shift from shorter to longer wavelength is what, according to the neuroscientists, triggers those neurones to produce the neuromedin that in turns stimulate the production of melatonin and put us to sleep.

If we read a (paper) book under a bulb light we are flooded with longer wavelengths and this stimulate those neurones and it would make you sleepy... So now you have a scientific excuse to get sleepy when reading: it is not about reading boring stuff, it is about neuromedin S production!

On the other hand, if we are looking at an eBook reader, be it a tablet or a backlighted Kindle, you are flooded with shorter wavelengths and that will keep you awake (if you still feel sleepy than it is the content that is really boring...)!

The research is interesting because for the first times it pinpoints the small area in the brain where these mechanisms are controlled and also because it may help in addressing sleep disorders as well as aspects of Alzheimer and depression diseases.  Notice that the area of the brain containing those neurones actually consists of over 20,000 neurones producing some 100 different neuropeptides. No wonder that it took quite some times to identify the few involved in the circadian cycle and the actual neuropeptide responsible.

A tiny step in a long road to understand our brain, and ourselves.