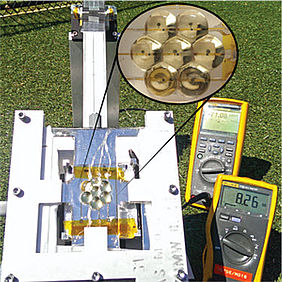 Prototype rooftop CPV solar panel being tested outdoors. The small black squares under each lenslet in the close-up are the solar cells. Credit: Nature Communications

Ever noticed those big slats protruding from satellites (in photos and movies, I mean...). They are used to harvest Sun light to convert it into electricity. That is an unlimited source of energy that can be used by space craft. However, harvesting it requires very large panels and the more effective they are the better. Hence it is not surprising that the very best in technology is being used, up there. Which turns out, not surprisingly, to be also pretty expensive. One of the tricks used to obtain the maximum efficiency is to keep the photovoltaic panels perpendicular to the Sun rays to that maximum conversion is possibile. That means having good tracking systems that continuously orient the panels.

Having the same kind of tracking here on Earth is possibile, of course (although you cannot get rid of clouds...), but it is pretty costly.

And here is where this invention of researchers from Penn State University comes in.

They have invented a micro scale solar concentrator based on inexpensive optics, see the photo and watch the clip.

The system is composed of two panels sandwiching the solar panel composed by cells just 1 square mm developed by researchers at the University of Illinois. The panel above, facing the Sun, is composed by micro lenses that magnify the underlaying cell, the panel below is composed by micro mirrors that reflect the Sun light. The result is an increase of the Sun Light hitting the micro cells by a 200 times factor!

It is yet another example of the interplay of economics with technology! Never look at just one of them...