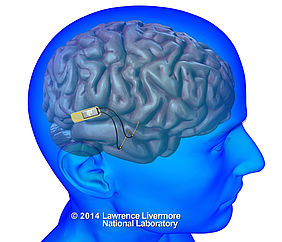 Lawrence Livermore National Laboratory (LLNL) will develop an implantable neural device with the ability to record and stimulate neurons within the brain to help restore memory. Credit: LLNL

It is not longer science fiction nor about "if" but about "when". Researchers are working to create an implantable device that can be controlled wirelessly to interact with neurones. The goal is to monitor neuronal activity and to influence neural activity to recover lost memories.

The research, RAM: Restoring Active Memory Program, is being funded by DARPA and will be carried out at the Lawrence Livermore National Laboratories, in collaboration with the University of Los Angeles (UCLA) and Medtronic, with 2.5 million US$.

The device will make possible real time recording and will provide closed-loop stimulation of neurones thus bridging gaps in an injured brain to restore the ability of forming new memories and access previous ones. This goal stems from the effects of Traumatic Brain Injury, TBI, that has affected 270,000 US service members since the year 2000. It will also find application in Alzheimer patients and part of this suffering from epilepsy.

The team will develop a neuromodulation system as a first step to investigate areas associated with memory and understand how new memories are formed.

According to the LLNL project leader, Satinderpall Pannu, director of the LLNL's centre for Bioengineering Bla:

"Currently, there is no effective treatment for memory loss resulting from conditions like TBI. This is a tremendous opportunity from DARPA to leverage Lawrence Livermore's advanced capabilities to develop cutting-edge medical devices that will change the health care landscape."

The device will be implanted under the skin (the scalp) and will connect to the brain via 64 channels on a ribbon containing a dense array of sensors. The ribbon will reach the entorhinal cortex and the hippocampus, the two areas in the brain associated with memories. In addition the device will be connected wirelessly to exchange data and power telemetry to an extern electronic system worn around the ear that will store all information related to memory storage and retrieval for further analyses.

The idea is to use the device for a limited time, to reinforce the brain synapses involved in the memory processes, hence it is targeted as a cure prosthetics rather than as a permanent add on.

I still see tremendous show stoppers on the way but just the fact that a concrete project is now being funded tells me that it might not reach the ultimate goal but it will still generate knowledge that will help subsequent projects to move forward.