Mr. Edison, we have improved on your design... 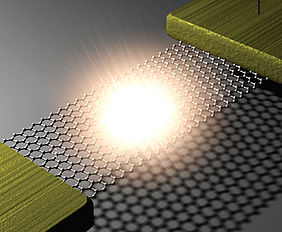 On October 22nd, 1879, after a lengthy number of experimenting with a variety of materials Edison finally hit on a solution to his quest for an affordable long lasting incandescent lamp by using a thin carbon filament. Curiously, he started his quest with carbon filaments then moving on to platinum and others, only to go back to carbon. On that day the lamp shone for over 13 hours. Not much if you compare to today's performance but at that time it was just amazing. And of course it could be perfected further.

This episode came back to my mind as I read the news from Columbia School of Engineering and Applied Science. In a leap that would have intrigued Edison, researchers at Columbia managed to use the thinnest carbon filaments to generate light.  They used graphene, a single layer of carbon atoms, extending ribbons of it across electrodes on a chip, see the image and the clip, and heating them up by applying a voltage (having a tiny current flow through them).

So far it has been impossible to create an incandescent bulb on a chip because of the high temperatures (thousands of degrees C) required to generate photons out of the movements of electrons that in turns would melt the tiny wire. Graphene ribbons on the other hand can be heated up to 2,500C (the temperature was measured not by a thermometer, which we don't have to measure temperature at atomic level but by analysing the wavelength of the emitted light) and the chip can survive that temperature because of an interesting property of graphene: as it heats up it becomes a heat insulator so that the high temperature remains encapsulated in a small space, where the light is actually emitted, whilst the edges of the ribbon connected to the electrode remains unaffected.
Another interesting plus of graphene is that it is transparent. Hence the photons emitted towards the base of the chip, the silicon substrata, are reflected back and mingle with the others that are projected upwards resulting in a mix of wavelengths that can be modulated as desired.

The graphene ribbons are so thin, one atom thin - as thin as it gets!- that they require very little power to heat up and the amount of photons generated is so high that the light produced by a single ribbon is visible to human eye.

Researchers expect to exploit these results in photo-electronics, making it possibile to have silicon chips that can produce light at very low cost, usable also to create new display screens. Can't wait to see it in my living room!