Moving sensors to get the pulse of Beijing 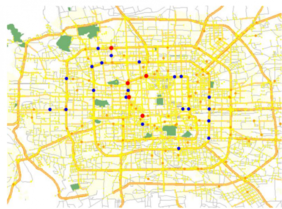 The quantity of data being generated is staggering and most of it goes under our perception and it is not used. If you think about it, by just walking around with your cell-phone in your purse or in your jacket you are creating positioning data that are amazingly accurate. Basically all of these data go unnoticed. And yet, they could be used for a variety of purposes.

Same goes with many other things. At the University of Tsunghua in Beijing a team of researchers have decided to leverage on data provided by taxis through their GPS systems in the navigation equipment.

They have accrued data from 10,000 taxicabs, polled once every minute for their location and focused on peak traffic hours, in the morning and in the evening. They collected over 500,000 routes the taxis run in those period in October 2012. They played a bit with those data and have been able to extract some interesting information, as an example about the most used roads and highest density cross-roads.

Now they have published the result in a paper. You can read it and see some interesting discovery.

However, the reason for including this news in this post is that it shows (and we are using yesterday technology, we are back in 2012) the amazing quantity of data that are generated and basically disregarded today.

At the EIT ICT Labs we have some activities that are aiming at exploring these unused data to understand how to leverage on them. This requires infrastructure (a cloud would do nicely) and a trusted ecosystem (and indeed we have some activities looking at privacy in the cloud). But more than that it requires imagination and that cannot be tapped from just a few (bright) minds. What is needed is to create a backstage onto which millions of minds can operate and out of that, in a compound way, we will see emerging behaviours and information. And that is likely to change the way we look at our environment and at social relation. It is also an area of wealth and the distribution of this wealth is likely to see a few lumps, aggregation, where a few big companies will exploit, and a thin veil that is of no interest to big companies but that is able to support the thrift of hundreds, thousands of companies, mostly start ups.