Moving quantum computing to the cloud 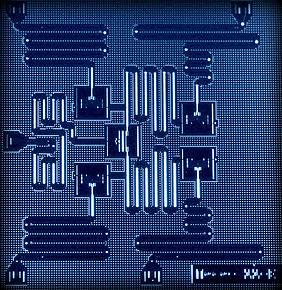 Layout of IBM’s five superconducting quantum bit device. In 2015, IBM scientists demonstrated critical breakthroughs to detect quantum errors by combining superconducting qubits in latticed arrangements, and whose quantum circuit design is the only physical architecture that can scale to larger dimensions. Now, IBM scientists have achieved a further advance by combining five qubits in the lattice architecture, which demonstrates a key operation known as a parity measurement — the basis of many quantum error correction protocols. Credit: IBM Research

Back in September 2015 I posted a news, A quantum lab at your fingertip, coming from the university of Vienna of a quantum lab made accessible through the web to perform quantum experiment.

Now I stepped onto the IBM announcement on the availability of a quantum computer in the Cloud, open to anybody interested in performing quantum computations.

The lab in the cloud, IBM Quantum Lab, is offering students, researchers and industry a free access to the IBM Quantum Lab and at their 5 Qubits quantum Computer. It might seem a minuscule quantum computer with just 5 Qubits when compared to the D-Wave 1,000 Qubits computer  but the IBM one is really delivering full quantum computation whilst the D-Wave one is showing just parts of quantum computation characteristics. Sufficient to say that a full quantum computer using 50 qubits would provide a processing power in areas like pattern matching that would beat the ones of today's most powerful supercomputers.

The reason for opening up the access to their quantum computer chip (it is a chip but to make it work it requires a large room filled with apparatus and a temperature that has to be strictly controlled (in the range of few degrees above absolute 0) is that IBM is looking to stimulate ideas n how to use the quantum computation characteristics.

We know that doing parallel processing is better suited to some applications than others (like, indeed, pattern matching or protein folding) but it is really an unexplored land. By making it possibile to thousands of researchers to access this kind of computation the hope is to see new ways of tackling complex computational problems  emerge.

Quantum computers are not going to replace today's Turing/von Neumann machines but they will complement them letting us explore new areas where current machine are not satisfactory.