Microrobot drilling through a clogged artery 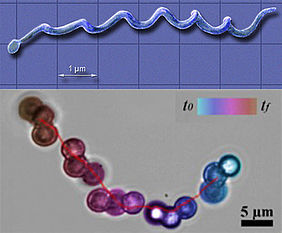 Teams of researchers from South Korea and US re joining forces to create microrobots that can swim in arteries to reach a clot and drill through it, dissolving it and restoring normal blood flow.

They have just announced the creation of microswimmers consisting of a few iron oxide beads (3 to start with) that are sticking together through chemical bonds and magnetic attraction.
The microswimmer is put in motion through an external magnetic field that causes the beads to rotate. This individual bead rotation in turns create a corkscrew movement to the linked chain propelling the microswimmer.

By modulating the magnetic field it is possible to change the rotation speed, the movement of the whole microswimmer and to have several microswimmers clustering to provide stronger effect on a clot.

Depending on the size of the clogged artery the surgeon will decide the type of aggregation needed and will operate from the outside of the body. The beads being composed of iron are not perceived as foreign objects, thus they do not generate any immune response.

Interestingly, the researchers took the idea of microswimmers from a nasty bacteria, Borrelia Burgdorferi, that causes the Lyme's disease. It consists of a filament that by twisting let the bacteria penetrate in the tissues and destroys cells on its wake.

The medical protocol calls for an injection in the blocked artery using a catheter and from the injection point the microswimmers are led to the clot using the magnetic field.

It will take a few more years to move into an actual body and see how good the microswimmers really are. According to the researcher by the end of this decade we should see them at work.