Micro-supercapacitors based on graphene 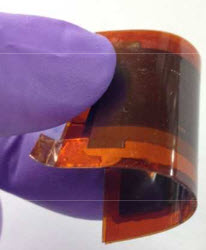 A schematic shows the process developed by Rice University scientists to make vertical microsupercapacitors with laser-induced graphene. The flexible devices show potential for use in wearable and next-generation electronics. Credit: Tour Group/Rice University

Batteries are still the weak part in any portable electronic system, despite of the progress made in their chemistry. One of the weakest point is the time it takes to recharge them. Supercapacitors, basically condenser, on the other hand can be recharged in a blink of an eye but the energy density is way lower than a chemical battery, which means that they have to be much bigger to deliver an equivalent capacity.

Supercapacitors, being condensers, work by trapping electrical charges between two walls (electrodes). The larger the surface of the walls, the more charges can be trapped, and hence the more capacity.  Since charges are free in the space between the two walls they are also repulsing one another and there is only a limited number of them that can be contained. On the contrary, in batteries charges are bound to atoms and can therefore be packed much more densely being locked by atomic forces. These stronger ties means that it takes longer to have the charges stick to the atoms (longer recharging time) and it also takes longer to free them from the atoms once you need them (lower discharge rate – this is why your camera flash use a condenser to power the flash that is charged by the battery pack, and that takes time because the battery release charges at a slow rate, but then the charges once in the condenser can be released, guess what, in a flash!).

Graphene, being a single layer of carbon that effectively can form a wall, has been seen as an ideal material to develop high capacity supercapacitors. Indeed, in theory, in the space of a car battery you can fold a graphene layer so many times that you would have a surface of over 100 million sq meters! Of course, the problem is to move from theory to practice, and do that using industrial processes leading to affordable manufacturing.

Now researchers at Rice University have found a way to stack graphene layers to multiply the surface of capacitors, hence multiply their capacity.

Already in 2014 researchers at Rice demonstrated that by using a laser beam it was possible to strip a polymer layer from atoms leaving just a porous layer of carbon atoms, i.e. graphene. Now they have demonstrated that it is possible to stack these layers, separating them by a solid electrolyte where charges can accumulate. The graphene layers act as conductors (electrodes) and experiments have shown that the power of these micro-supercapacitors is 3 times as much the one of batteries with an equivalent size. However, thin film lithium ion batteries still maintain the lead in terms of capacity. The researchers claim that it should be possibile to match this capacity by stacking more layers.

Another selling point for this stacked supercapacitor is that it is made of bendable materials, hence it can be used in wearable devices.