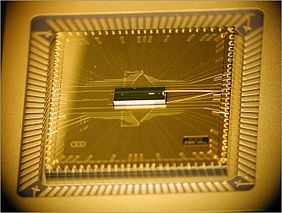 A photograph of the completed BGA trap assembly. The trap chip is at the center, sitting atop the larger interposer chip that fans out the wiring. The trap chip surface area is 1mm x 3mm, while the interposer is roughly 1 cm square. Credit: D. Youngner, : Honeywell

Researchers at Honeywell International and Georgia Tech Research Institute seem to have solved the problem of creating a chip that can trap ions to be manipulated by laser beams.

The construction of a quantum computer involves managing ions and this requires the creation of electromagnetic fields that in terms requires electrodes at the perimeter of the vacuum chamber where ions are managed.  The problem lies in the limited dimension of the perimeter that can only accomodate as many electrodes.

To overcome this constraint the researchers have adopted a micro-fabrication technique that allows for many more electrodes to be inserted, still leaving space to the laser beams. The technology is an evolution of the Ball Grid Array (BGA) used in electronic chips to increase the number of connections. Rather than using just the chip connectors at the perimeter of the chip, the BGA leverages on the lower surface of the chip that becomes a grid of contacts.

The new chip provides a chamber to host the ions and controlling them by laser beams. So far the number of ions that could be controlled has been less than 10 and this has hampered the construction of quantum computers that could perform meaningful operations. The hope is that this innovation coupled with several others will allow the computation of at least a hundred of qbits, in this case a hundred of ions.
It still look like reaching the rainbow end. We keep moving ahead but the pot of gold is still there... in sight but unreachable.