Micro bubbles as bullets in the brain 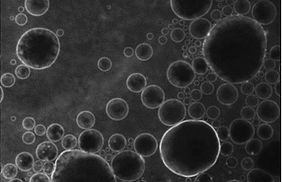 The delivery of drugs to the brain has always been a challenge. Although there is plenty of blood vessels in the brain that could be used to deliver medicine there is a barrier that is blocking the transit of drugs from the blood to the brain (BBB - Blood Brain Barrier). Only selected molecules, like oxygen and glucose, can flow through. This in general is very good since it protects neurones from potentially noxious substances and microorganisms but it is not good if what you need is to have some medication reaching the neurones.

Researchers have been looking at ways to overcome this BBB and already 10 years ago an article illustrated a potential way to do this by using ultrasound and micro-bubbles to open pores in the capillaries in the brain.

At that time it was little more than speculation and the problems faced were thorny: how can you open pores only in a very specific brain region? How can you create micro-bubbles that were not dangerous to the flow of blood?

Now, after 10 years, significant progress has been made, as announced in a new article where researchers from the University of Columbia reports the use of nano particles to create micro bubbles that expand to a desired size when activated by ultrasounds. These latter can be focussed with precision to a specific part of the brain so that the effect is limited to the desired region.

The crucial innovation has been to embed the drug onto the lipid membrane of the bubbles. Before, the bubbles were used as sort of cannons to breach the BBB so that drugs circulating the blood stream could pass through. However, that meant that the drug was also passing through the capillaries in other parts of the body where the BBB does not exist. By incorporating the drug into the bubbles one can avoid that. The bubble keeps the drug on its surface when it is circulating through the body and releases it only when the ultrasound bloats the bubble to a dimension of about 8 microns.

The mechanism has been tested on mice and it works. Now the researchers will be moving up a notch, experimenting on monkeys. If all goes well trials will start on humans. A crucial issue is to find the right ultrasound power leading to the specific bloating of the bubbles that leads to the opening of the pores in the BBB. The holy grail of finding a way to deliver drugs to neurons seems to be real close now.