Making it simpler to manufacture graphene 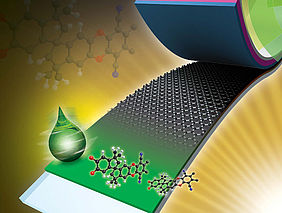 Spin-coating a polymer solution (green) to create a carbon nanosheet with characteristics similar to graphene, without the defects (black). Credit: Nanoscale

Researchers at the Korea Institute of Science and Technology, KIST, have found a way to produce graphene-like layers at a much lower cost through a simpler process based on polymers.

Part of their results was made available through a paper on the Nanoscale magazine in the January 21th edition. Now they are moving into refinement for making industrial production possible, targeting photovoltaic panels that can increase their yield by overlaying a graphene layer on the glass panel.

The process first requires coating a substrate, like quartz, with a polymer solution and then heating it. This leaves a one atom layer thick of carbon atoms forming hexagon that have properties very similar to graphene. The process is much simpler. Today production of graphene requires 8 steps and then the layer has to be moved to where one can use it, thus introducing wrinkles and breaks. In this case, on the contrary, the layer of carbon atoms can be produced directly on the quartz surface of the photovoltaic panel.

The breakthrough is in the polymer made with a rigid ladder structure called PIM-1 (Polymer of intrinsic microporosity-1) that forms the carbon nanostructure that is subsequently cleaned from the non carbon atoms by heat (1,200 degrees Celsius).

The European flagship project to exploit graphene has just started (it is in its second year of a 10 year roadmap) and will hopefully come out with solution for mass production of graphene, but it is nevertheless good to see that researchers can take some shortcuts to start having materials with very graphene like properties available today.